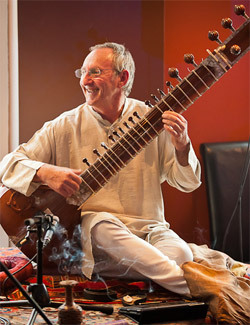 1972-1975 – Became residential pupil in Southall London of Punita Gupta , a disciple of Ravi Shankar. Continued to study Indian classical music by the traditional master/pupil method, eventually becoming proficient in the understanding, and use, of Rag and Tal, (Melody and Rhythm), and with the improvisational techniques associated with Northern Indian classical music conventions.

1975-1977 – Continued to learn and refine technique under the supervision of Bengali sitar player P. Gunguly.

1976 – Moved to Devon. Performed at, and collaborated with, the Indian Music Department at Dartington College of Art. 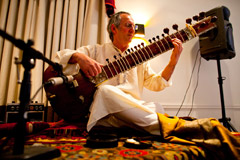 Ricky Romain has performed regularly throughout the West Country, Nationally and in Europe since the early 1980’s. He has also been involved in a wide variety of collaborations and recordings with Classical Indian musicians. In addition he has worked with practitioners from other musical and artistic genres including Jazz, Rock, Folk, World and Western Classical Music, Dance, and Movement. He has also been involved in a number of school and community arts projects using Indian Folk and Classical music as a focus for Inter- disciplinary study. For the last ten years he has been a associate lecturer in Indian classical music at the University of Plymouth.

Ricky Romain is an accomplished visual artist and has exhibited widely throughout the country and in Europe and has worked on interdisciplinary collaborative projects within many sections of the community, see: www.rickyromain.com