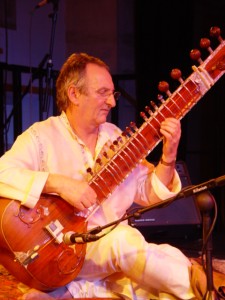 The joyous lyrical subtleties of Ricky Romain’s sitar playing, combined with rhythmic virtuosity of Jon Sterckx’ tabla, has delighted and uplifted audiences wherever they have played.

Their free improvisation, inspired by traditional melodies, evolves from a slow beginning and unfolds into complex rhythmic interplay. The emotional responses that they create evoke haunting atmospheres that are captivating, exciting and magical.

Some comments I have received

Namaste,
Brilliant concert solo extravaganza..   You are knowing very well how to play the sitar with expert inner knowledge. Thank you so much. It reminds of the rich colours of North India which so easily spring to mind…  with every note…
James Crowden author and poet (after Shute Festival concert)

Thank you to Ricky and Jon for giving Exeter the opportunity to truly engage with their unique style of Indian Classical Music …. their intricate compositional  complexities were delicately performed and only left us wanting another show.. their beautiful playing enabled us to pause and reconnect with ourselves and the world around us.We were very pleased to work with Samswara on this fund raising event for our work with local schoolsDeven Development Education Exeter www.globalcentredevon.org.uk

reviewed on 20th Jul 2017 by Girish Patel co-Director Stroud Sacred Music Festival
“I had the immense pleasure of watching and listening to Jon and Ricky at this year’s Stroud Sacred Music Festival. As a musician myself, originating from India, I was deeply moved by these two amazing musicians. The way they played and interacted with each other with their eyes and instruments is so much part of our Indian heritage and it is an absolute delight to see these guys emulate this with such compassion. Our festival, in Stroud, this year, was truly blessed by their presence.”

“The brilliant sitar of Ricky Romain in duet with Jon Sterckx’s tabla wizardry was a first class example of musicians “playing off” each other, their evident joy never becoming indulgent, and never compromising the aims of the music…” – Colin Sell.

You and Ricky were superb at the ‘Wilsford Asian Festival’. Thank you both so much for joining us and making it such a superb evening. The letters, cards and e-mails coming in from guests comment on your music and are gushing in praise.” – Event Organiser.

“…Brilliant music and you are a great duo!!” – June Burrough – Pierian Centre, Bristol.

“Thanks Ricky it was a fantastic event and your sitar playing was amazing” – Sanjay Sharma – Plymouth South Asian Society.

“Thank you so much for playing for us. So many memories have been etched into our consciousness of the day, and the backdrop to them all was the sound of the sitar and the tabla that you both so beautifully provided. Thank you so much, it was so beautiful!” – EL (Wedding)

If you would like further information on any of the gigs, or are interested in booking Ricky, please send us an email on the contact page.

Thursday 12th November 2020.  RICKY ROMAIN in concert at Shute House on his sitar part of the Shute Festival. https://www.crowdcast.io/e/ricky-romain-in-concert http://www.shutefest.org.uk

Thursday 30th January. Samswara workshop Twynham School Dorset Indian Music Workshop in Christchurch Dorset. Second part of the workshop understanding the Influences of Indian Music on the Beatles (George Harrison’s) Within You Without You

15th July 2017 –  As part of my Exibition at Black Swan Arts In The Absence of Truth. Me on sitar Steve Scott on 6 sting basss. in the Long Gallery. Black Swan Arts. Frome BA11 1BB

May 30th 2015 – Sitar Recital at Allsop Gallery, Bridport Arts Centre. To mark the end of his collaborative exhibition ‘Marking Injustice’, A painters way of coping with Heather Fallows and Robert Golden.

May 3rd 2015 – Sitar Workshop and Performance at Yarlington Fringe Festival

December 2nd, 2011, 6:50pm – Jon Sterckx (tabla) and Ricky Romain (sitar) will be giving a pre show performance before the Anoushkar Shankar concert
@ Colston Hall, Bristol (0117 922 3686)
The pre show performance will be free to attend, the Anoushka Shankar performance “Traveller” brings together the passionate and diverse music of Spain with the vibrant sounds of the Indian tradition. 8pm. Tickets: £20 / £18