In recent years, most of Indian classical music performances have been with tabla player Jon Sterckx, Ricky and Jon now perform together as Samswara.

Sam is the first beat of a taal, or Indian rhythmic cycle. Its literal translation is ‘together’. It is around this beat that the musicians weave their virtuosic improvisations and intricate compositions, passing the music between them, with each Avartan, or cycle inspiring the next.

Swara are the notes of the Indian musical scale. The literal translation is ‘self-shining forth’ – a strong feature of Indian music is of the performers bringing the music to life in the moment through spontaneous musical expression.

Dear Friends we were voted as best group MTM South West Asain & Ethnic Minorities Awards 2014. We  were also nominated in 2015. Thank you all for your support!

Virtuosic musicians Ricky Romain (sitar) and Jon Sterckx (tabla) have been thrilling and entertaining audiences throughout the UK since 2001.
During this time they have developed a reputation amongst music lovers nationally and internationally for their on stage rapport & spontaneous and playful musical dialogues.
The many positive responses from audiences highlight their engaging and dynamic performances that begin with slow, meditative melodies unfolding into complex exciting rhythmical interplay.

Thanks to all your amazing support we are happy to announce that we have won the MTM South West Asian and Ethnic Minorities Awards best singer/solo/group award 2014. The award was presented to Ricky last night 22nd December (as Jon was away visiting relations abroad) at a ceremony for over 300 people at the Marriot Hotel in Bristol. The event was organized by Radio Mast and its aim is to ‘honor’ the best in the South West. Photo shows Ricky receiving the award from Junior Sheikh on behalf of Samswara.

To book Samswara please send us an email via the contact page. 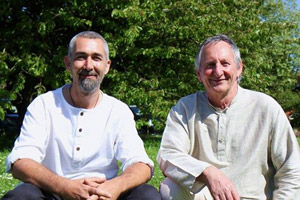 “Samswara were an absolute pleasure to work with. Their authentic laid back tunes set the tone for the whole evening allowing people to relax, have fun and mingle. The duo had a clear understanding and passion for their music and happily bounced off each other creating a good vibe all round. Hope to see them here some time soon.” – Lauren Lovatt, Matara Centre.

“Samswara are incredibly gifted and charismatic musicians and everyone enjoyed their wonderfully uplifting yet relaxed performance following our Indian inspired Asparagasm dinner at Matara in Gloucestershire in November. Both Ricky and Jon were great to work with and I look forward to reprising the theme, and the food, at a future London event as I had such wonderful feedback.” – Kate Lewis, Asparagasm